MORE THAN A FRACTION
Current Works and Projects 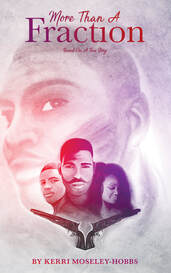 More Than A Fraction: Based on a True Story (The Book)
​
Based on a true story: Rediscover an extraordinary story with ordinary roots. Thomas and Othello Fraction are brothers and best friends who had heard, and let no one forget, that they were descendants of an African nobleman whose tribal scars looked like tiger stripes. But here they were in America, considered three-fifths a person, and fighting two battles: one for the Nation and one for themselves. Read the true story that leads up to a “guns drawn” standoff, and learn how the Fraction family came to America, contributed to the foundation of America, joined the Civil War, survived murder attempts on their lives, and eventually settle outside of Blacksburg, Virginia as southern refugees.
Category: Historical Creative Nonfiction
ISBN-10: 1547055391
ISBN-13: 978-1547055395
Publisher: Imagination Lunchbox LLC/CreateSpace Independent Publishing Platform
Purchase "More Than A Fraction"
​More Than A Fraction: From Separation to Reunification

Conducting research and developing events and projects that: (1) Traces the migration and the stories of the enslaved community from Montgomery County, Virginia after exile and harassments stemming from slavery emancipation and the Virginia Black Codes; (2) Locating the descendants of those who were enslaved at the Smithfield and Solitude plantations (modern day Virginia Tech University) who were separated during slave trading, or lost during exile and reintroducing them to their history and each other. This includes continuous research expeditions and communal events that have brought together descendants from Maryland, Philadelphia, Montana, Minnesota, California, Texas, Missouri, Georgia, Oklahoma, and the District of Columbia.

Assisting the foundation with research, exhibits, and interpretations of the marginalized community (enslaved, indentured, and native) spanning the 18th and 19th century for the Smithfield house museum.

Assisting the university with multiple projects including: (1) Research on the marginalized community (enslaved) who contributed to the foundation of the university; (2) Educational exhibits in the Solitude house and the Fraction Family Cabin; (3) Interpretations of African American history as it relates to the University spanning the 18th and 19th century; (4) authoring text and chapters for university based exhibits, signs, articles, special collections additions, and university published books.

As we move forward and continue to build and expand in this area, our projects need your support! For more information, please CLICK HERE